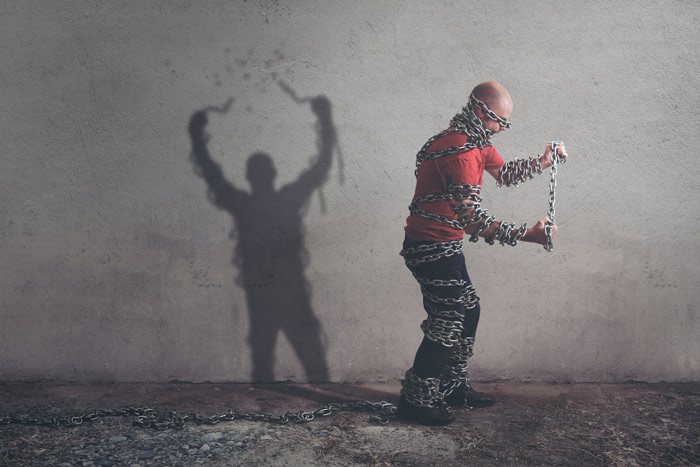 Methamphetamine, also referred to as crystal meth or meth, is a highly-addictive stimulant that has serious consequences for an individual’s brain and nervous system. Understanding the symptoms of meth dependency in yourself or a loved one is critical to get the proper treatment, especially so withdrawal symptoms aren’t so challenging.

The DEA classifies methamphetamine as a Schedule II stimulant under the Controlled Substances Act, “which means that it has a high potential for abuse and a currently accepted medical use (in FDA-approved products).”

Although much of illicit meth comes from Mexico, it’s also produced in the U.S., usually using pseudoephedrine, a common ingredient found in cold medication. The U.S. Food and Drug Administration enacted the Combat Methamphetamine Epidemic Act of 2005 to remove any over-the-counter medications containing pseudoephedrine to pharmacist-issued only.

Why Is Meth So Addictive?

While all drugs affect the brain, meth is particularly intrusive. Whether smoked, injected, snorted, or ingested, it produces a rush of dopamine that can last a few minutes or half a day. Dopamine is a brain chemical responsible for feelings of pleasure and satisfaction. Often referred to as the “reward” neurotransmitter, when people take meth, they’re constantly seeking its “feel good” boost.

However, studies indicate that over time, addiction to meth and other drugs causes dopamine receptors to have trouble producing the chemical naturally. With this compromised brain activity, individuals continue to use substances in order to feel that reward surge they had before. Habitual drug use creates this vicious cycle and alters behavioral patterns, since individuals with meth addiction have little interest in anything that doesn’t give them the same feeling.

According to the Department of Justice Drug Enforcement Administration (DEA), meth addiction and unregulated dopamine also causes additional problems, such as:

With these and other behavioral challenges, it’s no wonder why meth is a challenging addiction to beat. If someone has additional risk factors, such as a genetic predisposition to addiction combined with environmental influences, they face tremendous difficulty with physical, mental, and emotional dependency.

In 2021, U.S.News and World Report indicated that “many meth users have a combination of medical, mental and substance use issues, including all three at the same time.” Additionally, people addicted to meth were “twice as likely as non-users to have two or more chronic medical conditions; three times as likely to have mental illness; and more than four times as likely to have a substance use disorder involving drugs such as heroin, prescription stimulants, prescription opioids, cocaine and sedatives.”

WebMD indicates these are some of the key signs of meth addiction, which we list verbatim:

Long-term physical symptoms of meth use are:

Additionally, more serious symptoms of meth addiction might include:

In a personal essay for The Vox, Ed Kressy detailed the harrowing experiences he had for 11 years while addicted to meth. These included sleeping with a gun on his chest because he was convinced people were trying to kill him, stealing from relatives, and moving between homeless shelters, jail, and psychiatric wards. Now a business owner and author, Kressy made it through to come out on the other side, able to help others and offer this advice for people who might have substance use disorder or love someone who does:

“Try to accept that for many of us, the best help—the only real help—can’t come directly from you. This can be a formidable task, this acceptance. The good news is the rest is relatively straightforward. Find someone who has been there. We’re here for you and the person you care about. We’re willing to assist where we can. After all, we’ve finally changed from being the people we once were.”

So where do you turn?

At Willingway, we understand the depth of addiction is beyond the surface of substance use. Our board-certified professionals unify to ease the transition between the physical discomfort of meth withdrawal symptoms and eventual health, including mental and emotional wellness.

Without a doubt, meth withdrawal isn’t pleasant for a couple of weeks. But don’t let the fear of detoxification keep you from proper care. Our ASAM-certified medical director guides our medical team through a refined detox protocol that protects against the seizures often associated with symptoms of withdrawal so our clients remain as comfortable as possible.

That’s only the first step in your recovery journey. Then, you’ll uncover what led to addiction and heal from it, all the while creating a new life of balance and hope.Through it all is unwavering support from not only the staff at Willingway, but also hundreds of other people you’ll meet through our continuing care community groups—individuals who’ve walked the same path and, as Kressy said above, “changed from being the people they once were.” You can, too. Let us help.

Do you know someone looking for addiction treatment in Georgia? To find out more about services offered by Willingway contact us 24 hours a day at 888-979-2140, and let us help you get started on the road to recovery.