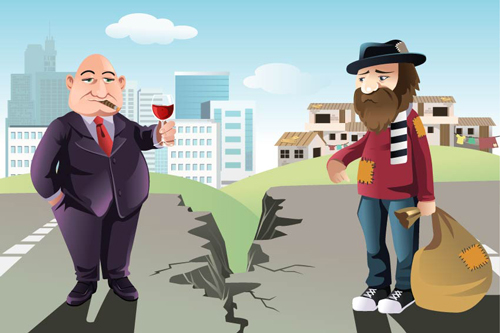 Addiction can affect anyone, regardless of socioeconomic standing.

According to the 2010 National Survey on Drug Use and Health, 22.6 million Americans age 12 and above (8.9 percent of the total population age 12 and over) had used an illegal drug or abused a prescription drug in the month the survey was conducted, and those numbers have since risen. The study found that drug abuse is highest among people in their late teens and early twenties, and that trend is constant. Over 17.4 million people had used marijuana in the month of the study, and more than half of Americans over the age of twelve reported drinking alcohol, with 23 percent reporting that they engaged in binge drinking.

Alcohol abuse seems to be more prevalent among the upper income bracket and also correlates with higher education:

In the meantime, opioid abuse has reached epidemic proportions in our country. The Center for Disease Control and Prevention (CDC) states that the rate of overdose deaths from opioids, including oxycodone (OxyContin, Percocet), hydrocodone (Vicodin, Norco), and hydromorphone (Dilaudid) were highest in the states with higher poverty levels.

Although heroin use is higher among those living in poverty, there has been a steady incline of heroin use in all income brackets.

According to CDC, “Heroin use has increased across the US among men and women, most age groups, and all income levels. Some of the greatest increases occurred in demographic groups with historically low rates of heroin use: women, the privately insured, and people with higher incomes. Not only are people using heroin, they are also abusing multiple other substances, especially cocaine and prescription opioid painkillers. As heroin use has increased, so have heroin-related overdose deaths. Between 2002 and 2013, the rate of heroin-related overdose deaths nearly quadrupled, and more than 8,200 people died in 2013. States play a central role in prevention, treatment, and recovery efforts for this growing epidemic.” Heroin use in Americans with an annual income of $20,000- $49,000 had the highest increase.

The Affordable Care Act that has been put into place includes substance use disorders as one of the ten elements of essential health benefits. This means that all health insurances sold on Health Insurance Exchanges or provided by Medicaid must include services for substance abuse disorders. With this, hopefully those in lower income brackets can seek out and get the treatment that they need.

Are you ready to reach out for help? Find out more about our day treatment for addiction in Georgia. Contact us 24 hours a day at 888-979-2140; our experienced and trained staff can help get you on the road to lasting recovery.